On the eve of the new year, we created the best drinking game. Because it is so much fun, I want to share it with you so that you can have fun, too. You will need the following:
Once you've got everything, it's time to define the rules for the movie you've chosen. Army of Darkness

You must drink when:

And that's all you need to know to get started. Reload during talky parts, have fun and don't hurt anyone 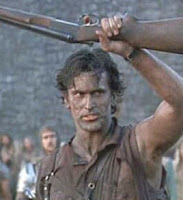 +1 this drinking game. It is awesome!