Wouldn't it be creepy if you inherited a jacket from a lost uncle that you never knew about who disappeared under mysterious circumstances and you were wearing it around and reached into the pocket and found this?

Alden called me last night just in time to inform me to turn on the news and catch a short feature on sculptor Willard Wigan. Check him out. He's filthy rich now, as he should be. Yes, this is the head of a regular sewing needle. 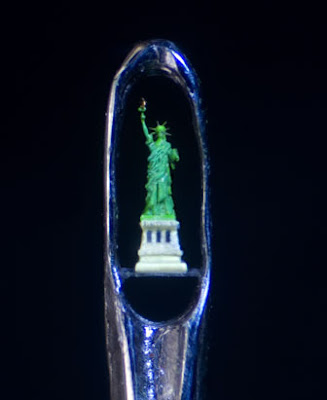 I got tagged by Susan to list 8 random things about myself. After reading her 8 things, I am going to list the first 8 things that come to mind.

1. Most of my dreams have celebrity cameos.

2. I have done other people's homework for money.

3. I've had 2 insignificant premonitions that proved to be completely accurate. One regarding a phone call I would receive and one regarding the location of 3 specific stones buried in the ground.

4. As a child, I lived in a teepee, a schoolbus, a church and more than 30 other places.

5. I have lain in someone else's grave.

6. One night in 7th grade, I changed my handwriting style forever.

8. I've never seen fireflies, but they are one of my favorite things.

So, since this is how it goes, I'm tagging the people I'm pretty sure might actually read this and play along: Dave, Chief and Goblins - you guys are 'it'.
at 12:12 AM

Yesterday the Nealham gang got together for some drinking and merry-making and it resulted in something short you might call a film.

It's the 4th episode in the ongoing Chest! Face! Crotch! series by Nealham, but I'm the new guy and this is my first time helping out with it.

Did every boy at some point in his youth think that the ultimate move was an elbow to the chest followed by the swinging of the fist up into the face and then all the way back down to end with a smashing blow to the crotch? I know I did. Where did we learn that move?

I was in the theater watching 28 Weeks Later when it dawned on me that one of my favorite music videos contains the most precious, pristine Rat King of all. Check out the soft, white blanket of rats that enters about 3/4 through this clip:

Check out this little snippet of the original song by the rat king of pop.
at 12:08 AM 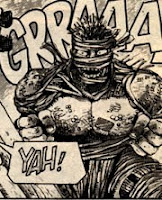 dls: watch out for plague-bearing fleas
LaserWolf: oh, damn
LaserWolf: i've already got a few bites
dls: do you have any buboes yet?
LaserWolf: i guess not
LaserWolf: what are they?
bastard: they are actually pretty nice ones, especially for $2 a piece at Goodwill. :D
LaserWolf: sweet
LaserWolf: i will look for them
dls: I think its when your glands get swollen
LaserWolf: oh
LaserWolf: dang
dls: around your neck and armpits
LaserWolf: so that's what these are
LaserWolf: i thought you were talking about some cool new creature to capture
dls: haha
LaserWolf: i hope I can get at least $2 for these at goodwill
LaserWolf: they are definitely troubling me
dls: man, I guess you can get just about anything at goodwill for $2
at 1:14 PM

We are helping build the virtual world. After you watch that video, go give Photosynth a try. I'm serious.
at 6:11 PM